Between 1579 and 1850, over one hundred different maps of each county have been published. These range from the size of a large postage stamp to large multi-sheet wall maps, from the very simple to the very elaborate in design, and from tens of pounds to many thousands in today's market-place. Antique maps have a timeless appeal for the collector, decorator or just plain curious, and this article aims to provide an introduction to map buying.

In broad terms, all antique maps of the British counties were printed, as opposed to manuscript productions. Until about 1820 when steelplate and lithographic processes came into use, all were printed from engraved copperplates. A map would be drawn by a draftsman and engraved in reverse on the metal with, perhaps, another artist producing a title cartouche, flamboyant lettering and vignette illustrations.

Most maps appeared in atlases but from about 1750 larger-scale separately issued maps, usually folding and mounted on canvas, or sold as wall hangings, can be found. Over the years map-dealers have "broken" atlases in order to supply their customers with maps of their areas of interest, however, the market for early atlases is now strong enough that good examples of complete atlases are particularly sought-after and invariably remain intact. Virtually all maps now on the market were removed from atlases some time ago or come from incomplete books. 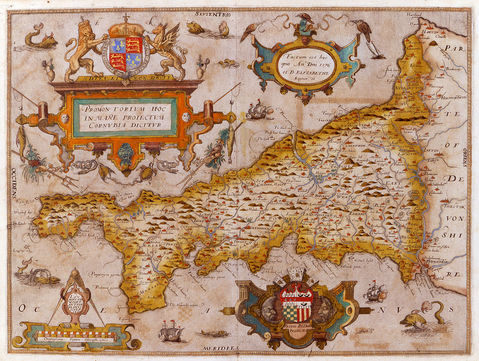 Prior to 1579, Britain's cartographic representation had been limited to general maps of not very great detail or accuracy and a handful of town plans, including London and Cambridge. Recognising the lack of adequate maps for home defence and for local use, Sir Thomas Seckford, a master of Requests in Queen Elizabeth's Court, commissioned Christopher Saxton, a Cheshireman, to survey and have published a series of maps of England and Wales. Saxton is credited with much of the mapping himself and the maps were finely engraved by a group of English and Flemish artisans, and were published in London. The maps were first published in finished atlas form in 1579 and the copperplates remained usable and were re-published over the next 150 years. As the first maps of the English and Welsh counties and as fine engravings they are particularly sought-after now, especially, as sometimes found, in good original colour.

In 1607 Saxton's maps formed the basis for a series engraved by William Kip and William Hole to illustrate William Camden's Britannia - an historical guide to the country. These maps, not to be confused with the original Saxton editions, are smaller and show each county individually whereas Saxton had grouped some counties together. They are consequently important as, in many cases, they are the earliest available maps of individual counties. 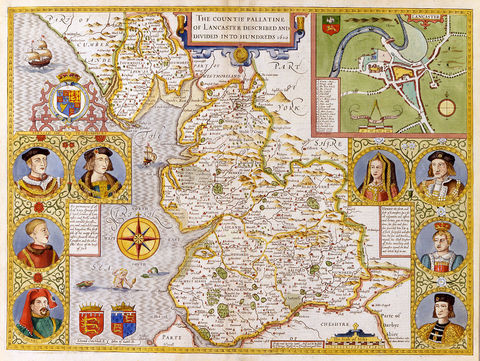 However, the best-known series of county maps must be those by John Speed for his Theatre of the Empire of Great Britaine, first published in 1612. Speed acknowledged putting "my sickle into other mens corne", crediting Saxton and John Norden with the cartographic content of his maps. However, in incorporating vignette scenes of battles, views, archaeological remains and antiquities, town plans, portraits, and panels of descriptive text, Speed's maps achieved a popularity that saw the printing of five separate editions within the atlas's first 20 years.

Speed's map plates, like those of Saxton, also remained in use over a prolonged period with the edition of 1676, identified by the imprint of publishers Richard Basset and Thomas Chiswell, being the most commonly found. This edition illustrates clearly the difference in quality between the earlier and later "pulls" from a copperplate which tended to wear and lose definition over a lengthy period of use. Early editions tend to be more expensive and are harder to find although their general decorative appearance may not be very different.

During the seventeenth century, English map production was very limited with a "pocket" edition of Speed's maps satisfying popular demand and two other series of maps to complement new editions of Britannia produced by Richard Blome in 1673 and Robert Morden in 1695. Also of note is John Ogilby's innovative series of 100 road "strip" maps which followed the major post and cross (linking) roads of England and Wales. Using the newly accepted statute measurement for a mile of 1760 yards these maps show more detail for specific areas than other contemporary maps. 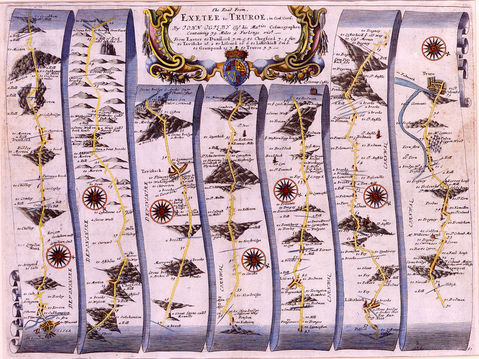 The English map trade, in terms of quality of production and presentation was eclipsed by the sumptuous atlases compiled by the Amsterdam map makers; the Blaeu family and their competitor Jan Jansson. Each produced multi-volume world atlases with one volume devoted to the English and Welsh counties. In each case the maps were based on those of Speed, comparatively uncluttered, artistically designed and elegantly engraved with pastoral scenes and genteel figures gracing the title pieces. Joan Blaeu's atlas appeared first in 1645, Jansson's a year later, and each, following Speed's lead, also produced maps of the four Irish provinces. Blaeu's maps tend to be more highly regarded as the engraving is superior, their paper quality better and their typically found hand colour, done in-house, more carefully applied. Blaeu is also credited with publication in 1654 of the first atlas of Scottish county maps, mainly based on the work of Timothy Pont, which provide the best detail of the country for over the next one hundred years.

The eighteenth century saw English cartography mature into a science which, in broad terms, saw many areas of the world mapped precisely for the first time. Much of the impetus for this achievement had derived from the acceptance of the need for good maps of the coast and country of England and Wales in the face of increasing threats to the nation's security from France. 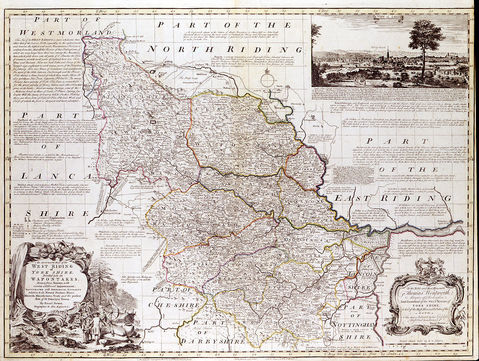 From around 1700 until 1750, a number of mapmakers, such as John Seller, Robert Morden, Emanuel Bowen, Herman Moll, Thomas Badeslade and Thomas Kitchin, produced atlases of attractive small format county maps that can still be found on the market. Maps of this period are generally neatly engraved and often with decorative title cartouches.

Popular as these atlases were, the inevitable limitation of detail on such small maps made the need for more detailed maps essential. To this end The Royal Society for the Encouragement of Arts, Manufactures and Commerce announced, in 1759, an award of one hundred guineas for the production of a good one-inch-to-the-mile county survey. Prior to this time a few individual counties had been mapped at large scales but the award focused cartographer's activities on a move away from the traditional atlas of maps of individual counties towards larger scale separate publications and sectional atlases.

The Large English Atlas of Emanuel Bowen and Thomas Kitchin comprised maps compiled between 1750 and 1760 that bridged the gap between the small and pretty, and the large and detailed. Produced on a larger format than before and with vignette panoramas, inset plans and panels of extensive text describing the towns and economic activities of the county shown, these maps were the best of the time - their popularity attested to by the many reissues of the atlas over forty years.

The most important map publisher throughout the latter eighteenth and early nineteenth century was John Cary whose various county atlases comprised finely engraved, detailed maps. He also produced atlases of world maps and numerous separately issued works - his career spanning the development and growth of the Ordnance Survey, on whose work virtually all current British cartographic publications are now based. 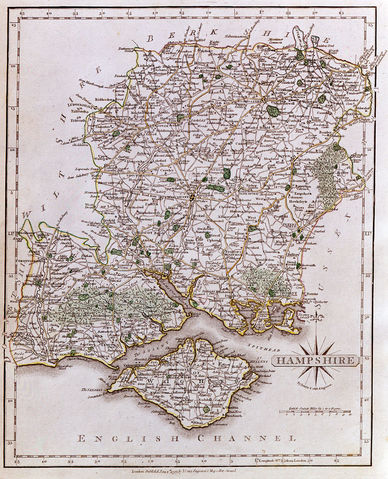 The work of the brothers Christopher and James Greenwood should also be noted for their atlas of large-format and immensely detailed maps of each county - remarkable for its fine production. These maps were engraved on steel, a more durable medium than copper, and had large vignette views of a major building within the county. Published around 1830, the maps are usually found with strong original wash colour.

Despite the availability of the Ordnance Survey's maps at this time, independent map publishers, often using information from the official body, continued to produce county atlases although the maps' decorative elements were often negligible. The notable exception to this trend was the atlas of maps produced by Thomas Moule, herald, genealogist, historian, mathematician and Post-Master, which are commonly regarded as the last series of decorative county maps. First published in 1834 the maps, in most cases, are set within elaborate floral or architectural surrounds within which vignette scenes of major local houses, towns, churches, rural vistas and so on are set. The maps were published over many years and it is possible to trace the development of the English railway system as each plate is up-dated for a new edition. 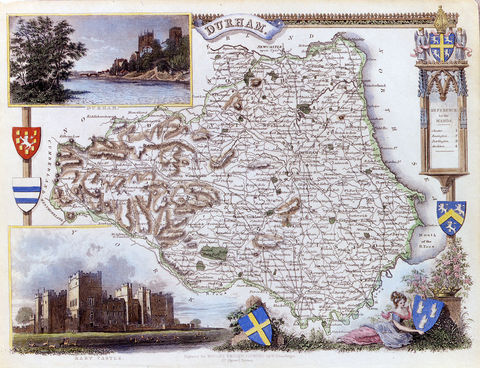 An article of this nature cannot do justice to the many other cartographers who, especially during the seventeenth and eighteenth centuries, produced interesting and decorative maps that can still be found in the market-place.

With very few exceptions the maps we are considering were printed with black/sepia coloured ink on a white/creamy paper and any colour was applied by hand. As a generalisation, the Dutch-published maps of Blaeu and Jansson will normally be in original colour, ie colour applied in the publishing house, or, very soon after publication. English map productions, until about 1800, were all issued uncoloured, except for the maps of Saxton, Moll, Bowen and Kitchin, and Cary which had outline colour along the county and hundred borders. Nineteenth century maps are usually found with publishers' wash, or block, colour. John Speed maps are very rare in "original" colour and it must be accepted that most maps in the market have been coloured recently. It is often difficult to identify the age of colouring but whether a map had colour added 5, 10, or 60 years ago, the accepted view is that this does not devalue the map providing it has been done with care and is correct for that map's age and style.

Because a map may have been protected within the covers of a book for many years one should expect to find it in good condition, however, this is a relative term and certain imperfections may be accommodated. Generally speaking, the older and more rare the map, the greater the likelihood of a split appearing at the centrefold, or damage to the margins. Such things are repairable but should be reflected in the price asked. Waterstains, ink marks, foxing (brown spotting) to the paper, and wormholes, where the paper has been eaten by termites may also be present and should be treated by a paper restorer.

Generally speaking, although reproductions of many decorative maps have been published in recent years, these have not been produced to deceive so the problem of fakes is rarely encountered. Paper produced prior to about 1800, should, when held up to the light, show chain-lines - a grid of close horizontal lines cut by verticals every inch or so. A watermark may also be seen, and the paper should have a textured feel to it - smooth feeling paper tends to be a recent innovation.

Map prices reflect that item's age, decorative quality, condition, rarity, colour and area shown. Some map-makers' work is more sought after than others of the same period, dependent generally on the intrinsic decorative appeal of the work, and maps of wealthy, heavily populated areas are generally more valuable than those of rural counties. A comparison of the country's property values equates well with prices of maps.

Inevitably, all the comments above are generalisations as no two maps are the same. Two examples of a map of Cornwall by John Speed, for example, may seem the same but can differ in condition, colour, and edition. There is no specific price for any one map but the seller should be able to support his price with comparative examples. Maps can be found in general antique shops, antiquarian bookshops, book and map fairs, and at the specialist map and print shops around the country. Maps can also be found at auctions and through internet websites but expert advice should be taken when buying items unseen. Whether buying a map simply for decoration or in developing a collection the buyer is recommended to go to a specialist and ask questions.