A Brief History of Cartography - the Fascinating World of Antique Maps

Over the last five hundred years printed maps have recorded where man has been and detailed where one might go.  Published in atlases, travel books or as wall decoration, maps of all areas reflect the advances of western knowledge of new-found lands, key moments in international history, and changes in their production techniques and illustrative styles.

Jonathan Potter’s gallery, in the heart of the Georgian splendour of Bath, houses one of the world’s finest selections of original antique maps.  Printed from the time of Columbus and Magellan, rare sixteenth century woodblock maps show the earliest representations of the shape of the New World while, in contrast, nineteenth century lithographed maps reflect, in great detail, the advancement of the railways and the progress of industrialisation.

Between these times maps were printed, mainly from engraved copperplates, and incorporate the period known as “The Golden Age of Cartography” when Dutch mapmakers dominated the market with finely designed, detailed maps of all parts of Britain, Europe and the known world.  The seventeenth century saw the development of great trading empires while the eighteenth saw British and French Imperial ambitions, the world-defining voyages of Cook and others, all recorded in cartographic form.

In addition to the historical importance of many antique maps their most immediate appeal lies in their method of presentation.  From the earliest days maps were seen as much more than records of where places are, and maps are appreciated now for their decorative vignette and bordering illustrations, the often numerous annotated comments and their elegant flourishes and embellishments.  For many Europeans these illustrations, of native figures, foreign towns and dwellings, and indigenous animals, birds and plants, not to mention monsters and extraordinary creatures, would be the first such images of these new lands they would see. 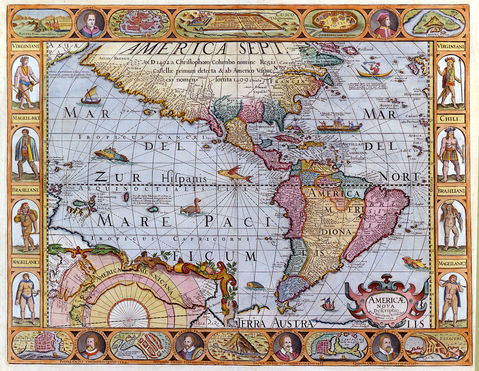