Janssonius Jr. settled in Amsterdam and further strengthened his family links with the Hondius family when he married Jodocus’ daughter Elisabeth in 1612. From about 1633 onwards Janssonius’ name and imprint started appearing on the Mercator/Hondius “Atlas ...” After 1636 the name of the “Atlas ...” was changed to “Atlas Novus “with Janssonius being responsible, in the main, for its publication.

The “Atlas Novus” was expanded by Janssonius over the years of its publication in an attempt to rival Blaeu’s “Atlas Maior” for size and quality. Janssonius’ “Atlas Novus” eventually comprised six volumes with a nautical atlas and an atlas of the ancient world included. The maps were relatively similar format to those of Blaeu, although a difference in style is certainly discernible.

Janssonius' county maps from the "Atlas Novus" are seen far less frequently than those of his rival Blaeu, but are similar in appearance with coats of arms and decorative title cartouches. Janssonius, like Blaeu, used Speed maps when creating his own thus showing hundreds but no roads. However, Janssonius (and Blaeu) chose to omit Speed’s innovative town plans.

Janssonius also issued an “Atlas Maior” of his own, again in competition with Blaeu, but this was not issued as regularly as the Blaeu version. The “Atlas Maior” comprised some ten volumes - eleven if the Cellarius celestial volume is included.

A revised reprint of Braun and Hogenberg’s “Civitates Orbis Terrarum”, retaining many of the existing plates, but also adding a number of new ones, was also published by Janssonius in 1657 and comprised eight volumes. Janssonius also published a number of separate maps as well as the German text edition of Petrus Bertius’ “Tabularum Geographicarum” and several editions of the “Accuratissima Orbis Antiqui Delineatio” amongst other volumes. 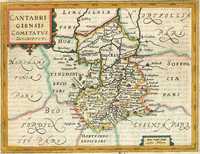 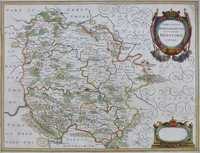 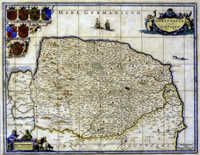 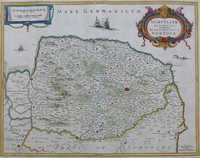 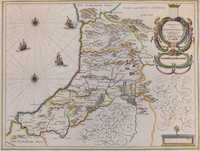