John Speed (1552-1629) is arguably the most famous English cartographer of any period, as a result of his atlas The Theatre of the Empire of Great Britaine. The individual maps are the best known and among the most sought-after of all county maps.  The maps themselves were derived from the best and most up- to-date sources available. However, Speed also made innovations of his own - introducing town plans on many of the maps, including county boundaries on almost all maps and also the coats of arms of local Earls and Dukes as well the Royal arms. The overall effect is to produce very decorative, attractive and informative maps.

Speed, a tailor’s son from Cheshire, conceived the Theatre Of The Empire Of Great Britain as a supplementary volume to his monumental History of Great Britain published in 1611. Finally published as a complete work in 1612, the atlas was the culmination of several years work during which pre-existing maps by Saxton and Norden were updated, information was gathered and collated, and new surveys were completed before the plates were engraved, mainly by Jodocus Hondius of Amsterdam. Many of the maps bear earlier dates and would have been available for sale as loose sheets prior to the completion of the atlas.
Text on the reverse describes that county, its industry and agriculture, its physical features and history. One Latin text edition was published in 1616, targeting the continental market, otherwise the several editions published before Speed’s death had English text.
Early editions of the Theatre Of The Empire Of Great Britain were published by John Sudbury and George Humble, who realised, given the increasing popularity of both county and world atlases and in the light of the success of Ortelius’s Theatrum …, the potential demand for an English world atlas. Consequently, in 1627, Speed’s Prospect Of The Most Famous Parts Of The World was published with 21 finely engraved maps.
The Prospect ...was the first world atlas by an Englishman, and its maps are famous for their bordering panels of national characters in local costume and panoramic views depicting the areas of major towns and cities.  In addition to the obvious decorative quality of the maps, regular atlas copies have two pages of English text printed on the reverse, giving a charming description of life in the early seventeenth century of the area shown. The maps of the world and America show California as an island and are amongst the earliest ever printed to depict this seventeenth-century cartographic “fact”.
By the time of the publication of the Prospect … in 1627, John Sudbury had retired from the partnership with George Humble, and, after his death in 1640, the copperplates were in possession of his son, William Humble. William continued publication on a rather ad hoc basis before relinquishing rights to William Garrett who, in turn, passed the plates to Roger Rea. William made some changes to the dates on some of the plates but issued only small numbers of any edition of the atlas.
Europe Maps   America Maps   English County Maps B-K   English County Maps L-Y   Title Pages 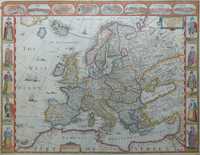 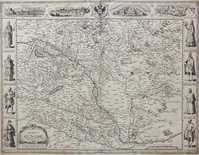 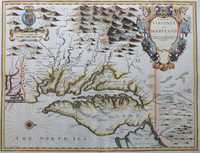 A Map Of Virginia And Maryland 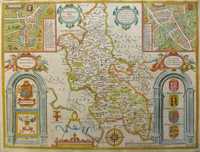 Buckingham Both Shyre, And Shire Towne ... 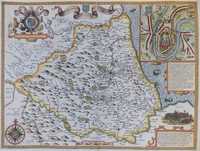 The Bishopricke And Citie Of Durham 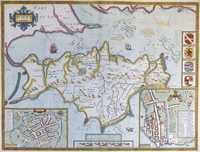 Leicester Both Countye And Citie Described ... 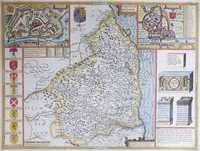 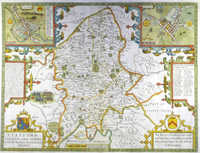 Stafford Countie And Towne With The Ancient Citie Lichfield ... 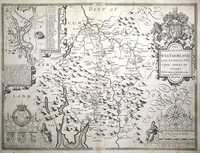 The Countie Westmorland And Kendale The Chief Towne Described ...

[Title-Page] The Theatre Of The Empire Of Great Britaine ...